In the summer of 2018, I was filmed in Scarborough by a TV production company making a series for Channel 5 about Sinkholes. As the episode has never been broadcast, I can only assume my performance was so dreadful, or so controversial, that it cannot be permitted to see the light of day, but I thought I’d blog about it anyway.

It all began when a Hull colleague of mine was contacted by the production company, who were trying to find a geologist who could tell them about coastal landslides in Scarborough. The 25th anniversary having just passed, I assumed the company was interested in the Holbeck Hall Hotel landslide. However, when I talked with them on the phone, this wasn’t the case. They’d heard only about a landslide in the spring of 2018, which I had to confess I knew nothing about.

From such inauspicious beginnings, our conversation piqued their interest in the Holbeck landslide, and mine in what was going on now. Both parties went away to do a bit more research, and when we spoke again a day or two later, it seemed there was enough of a story for them to want to do some filming, with me, in the South Bay.

Pretty much the best view in the world.

The following week, I found myself in the legendary Clock Café, holding a plastic box containing a miniature reconstruction* of the local geology. After nearly 40 years of yomping up and down the South Cliff on family holidays, suddenly I was there to explain its geological structure to the world. Well, to the viewers of Channel 5 at least.

(*comprising two beach cobbles, builders’ sand, some Plasticine and a Lego hotel. Sadly it will not make the cut.)

Now, I am definitely not a proper expert on coastal landslides, so – if the show is ever shown – writing this is perhaps a pre-emptive strike against looking like a dingbat on national telly**.

Nonetheless, I found the research really interesting, and turned up a history of landslides in Scarborough and the Yorkshire Coast that people might want to know about, So, rather than have it all go to waste, here are my findings.

A Brief History of Scarborough Landslides

Although the East Yorkshire coast is eroding much more rapidly, landslides are common in North Yorkshire, as summarized by E. Mark Lee in Chapter 6 of his co-authored book Geomorphological Processes and Landscape Change: Britain in the Last 1000 Years (Higgett and Lee 2008).

For Scarborough’s South Bay, the landslide story begins in 1737, when buildings in the Spa area, which had only recently been rebuilt, were destroyed. No major events seem to have occurred for the next 250-odd years, until by far the most dramatic landslide in Scarborough’s 20th Century history – the collapse of the cliff beneath the Holbeck Hall Hotel in June 1993.

A detailed webpage on the Holbeck Hall Landslide is provided by the British Geological Survey, so there’s no sense in me rehashing their expert information. However, it is worth pointing out that the rotational landslide occurred because soft Ice Age sediments, into which rainwater can seep and pond quite readily, sit on top of well-lithified Middle Jurassic bedrock. The Scarborough Spa marks a spring line, where the waters can seep out, but if – as in 1993 – the volumes of water are large, and they accumulate rapidly, their escape can be catastrophic.

I found this photograph of the hotel (from a BGS blogpost marking the 25th anniversary of the landslide), taken by the British Geological Survey immediately post-landslide, particularly amazing, though the classic footage is this video, starring Richard Whiteley:

It appears that the incident the production team had been alerted to had occurred over the weekend of March 17th/18th 2018, following the wild weather of late February and early March. A retaining wall below the Clock Café was pushed onto the chalets beneath, leaving cracked pavements above it, the wall leaning towards the sea, and the listed chalets listing. It attracted a bit of press coverage:

25th May 2018 (Daily Mail) – Scarborough beach chalets in danger of crumbling into the sea.

In June 2018, with rumours abounding that the Clock Cafe would have to be demolished, a series of new announcements were made. Firstly, the Clock Café demolition rumours were quashed. Then the Scarborough Borough Council announced that the incident was an “isolated wall movement that occurred in the spring behind the South Bay chalets”. It wasn’t a landslide, or a landslip. Overlooking my uncertainty over whether landslides and landslips are one and the same, perhaps it should simply be called a slope failure.

Either way, in late November 2018, a new movement of soil behind the wall caused further collapse of the chalets, and the borough council decided to demolish them as a matter of urgency. In February 2019, it was reported that they would be coming down imminently, but I’ve not been down to check. 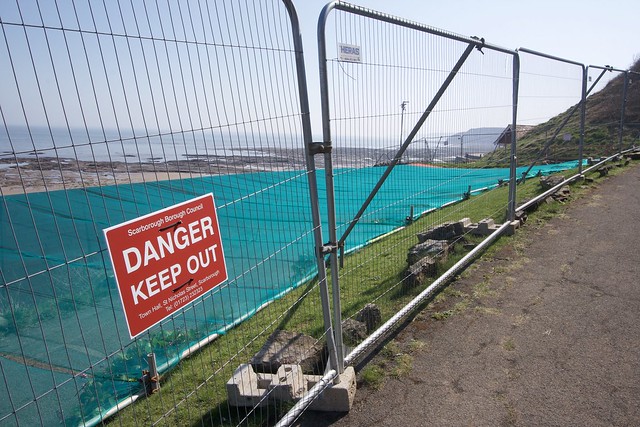 At the same time that the South Cliff chalets slope failure occurred, remediation works were about to begin, to try and stabilize the cliffs above the Spa Complex, a short distance to the north. This South Cliff Slope Stabilization Scheme was not set to include the Clock Café area, but instead try to secure the long-term stability of the gardens above the economically and historically important Spa area. As explained in an October 2016 consultancy report:

“The South Cliff upon which the proposed works area lies is inherently unstable…Ground modelling and stability analyses undertaken previously have found that the slopes are close to failure, with potential for both shallow and deep-seated failure. Such failure could result in the loss of parts of the Spa Gardens, damage to the Esplanade and damage to or complete loss of The Spa Complex. There is also clear potential for injury and loss of life.”

The contract was awarded to Balfour Beatty, and work began at the end of May 2018. The most recent update from the contractor reports that all is ‘going well‘. Presumably it has to be finished by March 2020, as a £7m South Cliff gardens regeneration scheme is due to begin then.

Are you putting any money on these gardens lasting a century? (image from Wikimedia Commons)

Given the predictions of warmer, wetter weather, higher sea-levels, and increased storm frequency, one can only wonder how this coastline will cope with Anthropocene climate change. It was only just over a decade that a fairly large landslide occurred at Knipe Point, at the northern end of Cayton Bay, and the last couple of years have seen numerous small to moderate collapses. Whether it ever makes it onto screen, one of my conclusions for the TV company was that, when it comes to landslides on this stretch of coastline, geologically it’s not a matter of if, but when.

Still, should you want to keep an eye on things, the National Landslide Database is probably the place to go.